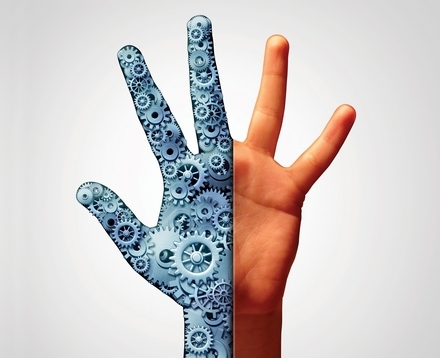 May 9, 2017, Augmented Reality
1.64kViews
The modern intersection of technology and work is a paradox. It’s both responsible for climbing corporate profits, and for mass job losses and rising income inequality. This has been called the robot revolution, but it’s not all doom and gloom for the laborer class.

A new breed of technologies called “augmented reality” — fueling popular mobile games like Pokemon Go — is altering that perception. It holds the potential to boost productivity and make economic growth through manufacturing a reality.

The innovation is one part interactive how-to and one part idiot-proofing, and is gaining traction in manufacturing, health care and other fields.

The software, called “Light Guide Systems” uses projectors to overlay step-by-step images and instructions, complete with visual cues like arrows and videos on parts and production areas to assist workers with proper assembly. A worker follows visual indicators to complete each step of the manufacturing process. A red light flashes and a buzzer sounds if a step is missed or incorrect part is used.

It’s a deceptively simple way to get some huge productivity and quality gains.

“(Augmented reality) is used sort of like turn-by-turn GPS in your car, except for manufacturing,” said Paul Ryznar, president and CEO of OPS. “When there’s only four turns, it’s easy; but if there are 50 turns, you’re going to make a mistake. Manufacturing is now all about variation and complicated processes. Our system eliminates that risk for errors. All the worker has to do is follow the lights.”

It’s an update on a Japanese concept called poka yoke, or driving down costs and increasing productivity in the manufacturing process through “dummy proofing,” and has been used for decades. The Japanese term, coined in the 1960s by a Toyota Motor Corp. engineer, defined the just-in-time production philosophy first implemented by Toyota before spreading to the other automakers. Production quality and efficiency spiked from implementation of the process.

Companies across the manufacturing sector are experimenting with augmented reality — most often with wearable devices, or glasses, rather than OPS’ projector system. Though, Ryznar said, wearables can create safety concerns as the image display on the eyeglasses impair worker vision.

General Electric Co. is experimenting with augmented reality in its oil and gas division.

Technicians assembling and inspecting nozzles for its heavy-duty gas turbines at GE’s Florence, Italy plant need to make 100 precise measurements before the part is installed into the turbine.

With the help of augmented reality software installed on a tablet, the process is reduced to just one hour.

“This used to take a full work day just to take those measurements,” Alhart said. “The productivity gains we’ve seen are startling and (augmented reality) has really made our workers more productive and efficient.”

Alhart said GE is expanding its use of augmented reality to its aviation and power business units in the next 12 months.

Roughly 14.4 million workers in the U.S. will wear augmented reality headsets in 2025, according to Forrester Research Inc.

Productivity — which measures workers’ output per hour — has largely been stagnant in the U.S. in recent years as no major innovations, such as the robot revolution of the 1980s and the internet boom of the 1990s, have hit the shop floor in the past two decades. In the U.S. productivity growth averaged just 0.5 percent annual growth between 2011 and 2016, compared to 3 percent annual growth between 1996 and 2005, according to data from the Bureau of Labor Statistics.

This slowing of productivity growth has led to weak economic growth — real gross domestic product growth was 1.6 percent in 2015, compared with 3.8 percent in 2004 — and stagnant wages that have drawn the ire of the White House.

President Donald Trump has called for 4 percent GDP growth through his policies, which experts predict will be nearly unattainable without massive gains in either the working-age population or significant gains in productivity.

The population of people not in prison or the military in prime working age, 25 to 54, boomed in the 1970s, 1980s and 1990s thanks to the baby boomer generation, women entering the workforce and immigration rising. That population rose from 69.4 million in 1969 to more than 126 million in December 2007. It has since tapered off to 125.6 million in February, according to the U.S. Federal Reserve.

However, with low birth rates, nearly 11,000 baby boomers retiring each day and new immigration restrictions under the Trump administration, population growth is pretty much off the table. Those factors are likely to force downward pressure on the economy.

Productivity gains are the only avenue to boost economic growth overall, especially to lower- and middle-class people, said Wallace Hopp, associate dean for learning design and professor of industrial and operations engineering at the University of Michigan Ross School of Business.

“Our economy is declining in its structural ability to generate wealth on a per person basis,” Hopp said. “No amount of fiddling with trade restrictions or pumping up employment through government spending will change this. The only way we are going to see sustained improvement in standards of living is by increasing productivity.”

Hopp said the concept of foolproofing the manufacturing process has the potential to do more than just streamline the process, it offers manufacturing a chance to stave off mass automation and maintain employment — but only marginally.

“The OPS system will make a tiny contribution to that, as will all of the other advances in both automation and work practices,” Hopp said. “But those have been going on for the past decade, and our productivity (growth) decline has been rapid.”

“Some point to the fact that a tremendous amount of innovation is happening in all sorts of fields having to do with digital electronics,” Ballard said. “That’s true, but I think there are limits to the amount of productivity growth we will get from all of that.”

Ryznar disagrees. He believes the Light Guide System will play a role in ensuring manufacturers choose human labor over automation as more manufacturing returns to the U.S. under pressure from the federal government — as Trump has maligned manufacturers for choosing low-cost countries.

“With the recent (political) focus on manufacturing in the U.S., as new plants come on board and new workers are hired, companies are asking themselves if they should put a person on that job or a robot,” Ryznar said. “We see Light Guide as an answer to that question. Companies can get their people up to speed quickly and boost productivity. That’s why I see us as not only a jobs retainer, but a jobs creator.”

So far, OPS is succeeding as its $10,000 to multi-million dollar systems are making there way to shop floors around the world — it currently sells in 13 countries with expectations of reaching 20 by the end of 2017.

OPS is now targeting the health care industry — specifically the manual kitting of surgical instruments. In most hospitals, workers organize and package surgical instruments based on the need of the surgery and surgeon. Errors are prevalent, Ryznar said.

“We launched Light Guide Systems in the automotive market because if it can work at an auto plant, it can work almost anywhere,” Ryznar said. “Now with confidence we can go into hospitals and expect medical can be more than 50 percent of our business (in the future).”

Ryznar said the only limits to the systems’ ability to help employers achieve optimal productivity and create more jobs is awareness.