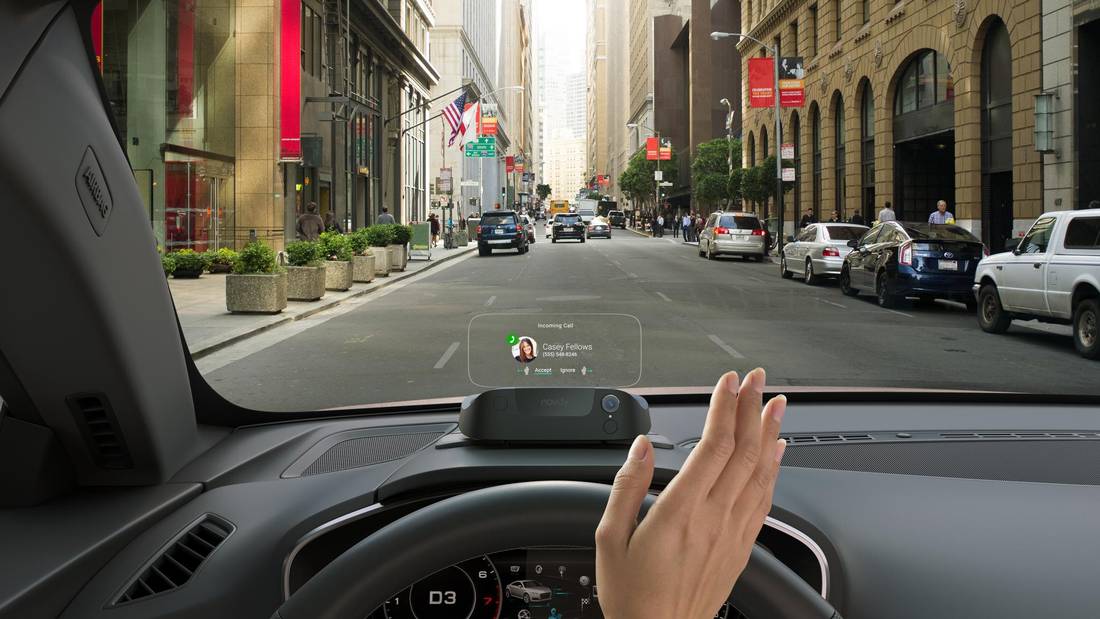 Augmented reality could allow drivers to view information such as speed and directions without taking their eyes off the road. IMAGES COURTESY OF NAVDY

Navigation arrows, pedestrians outlined in red, magnified road signs, “ghost” cars that show you where to go – they’re all on-screen features found in many PlayStation and Xbox racing games.

But the line between playing a video game and driving an actual car is about to get blurry as augmented reality (AR) begins to migrate into vehicle windshields.

Toyota last year patented an AR windshield – a slab of glass that can display computerized text and graphics, just like a smartphone screen. And in December, car systems designer Harman took a stake in Navdy, a San Francisco-based startup that makes AR display units that sit above a vehicle’s steering wheel, with an eye to full windshield integration.

Industry observers say the wide-scale rollout of AR in cars is still a few years away, but it is coming – and they’re bullish on the technology making driving safer and more fun.

AR has been around for a while, but its first real worldwide hit came last year courtesy of Pokémon Go. The smartphone game, which superimposes cartoon monsters on the real world using the phone’s camera, generated more than $1-billion (U.S.) for creator Niantic Inc. in just six months.

That smash success kicked off a gold rush, with companies of all sizes now racing to add AR to their products. Microsoft is selling its $3,000 HoloLens, a wearable holographic computer, while Apple is expected to make the technology a key feature of its 10th-anniversary iPhone this fall.

Gartner expects AR and its cousin, virtual reality, to generate $72-billion in device revenue alone over the next decade.

Auto makers are taking notice, as AR’s potential in-car benefits are obvious. Displaying important information such as speed and directions directly on the windshield, for example, would keep drivers from taking their eyes off the road.

Some manufacturers have already taken steps in this direction. Several Toyota models, including the Prius, can project such basic information onto the windshield. Jaguar Land Rover is also experimenting with AR.

More advanced implementations would allow for the addition of game-like capabilities. Toyota’s patent, for example, suggests AR could be used to show drivers exactly how much of a highway lane their car is taking up.

“Toyota recognizes the various benefits of heads-up display, including that a driver can see important information about roads, speeds … with less eye movement from the primary line of sight,” said Toyota Canada spokesman Michael Bouliane. “Toyota will continue to work to make this technology even more user-friendly.”

In the meantime, a number of third-party companies are betting drivers will want aftermarket units that deliver similar benefits.

Navdy’s device projects maps, caller IDs, messages, e-mails and music information so that they appear to be about a metre and a half in front of the driver’s point of view. The $499 device plugs into the car’s on-board diagnostics port and connects to a smartphone via Bluetooth, so it pulls information from both the vehicle and the Internet.

Navdy is now working with car makers through its partnership with Harman to build its technology into vehicles, which could happen in the next two or three years.

“There are people who would like this solution sooner rather than later, but we are working directly with auto manufacturers on that integration,” Navdy chief revenue officer Dan Currie said.

One of the challenges in adding AR to cars, he added, is the extra cost of effectively transforming windshields into transparent TV screens. Outfitting dashboards with three-dimensional projectors that beam images onto the windshield is a cheaper and more viable option.

“I’m not sure if the windscreen [route] is a long-term solution – unless there’s a dramatic reduction in cost,” Mr. Currie said.

AR is also likely to face regulatory concerns, since it may give drivers more visual information to digest. Auto makers will have to prove that the technology delivers safety benefits and isn’t just another distraction.

“Whenever you put something in front of someone’s face when they’re trying to navigate a car or motorcycle, there are a number of legislative and regulatory issues you have to get past to allow that to happen,” Mr. Nguyen said.

Courtesy of The Globe and Mail