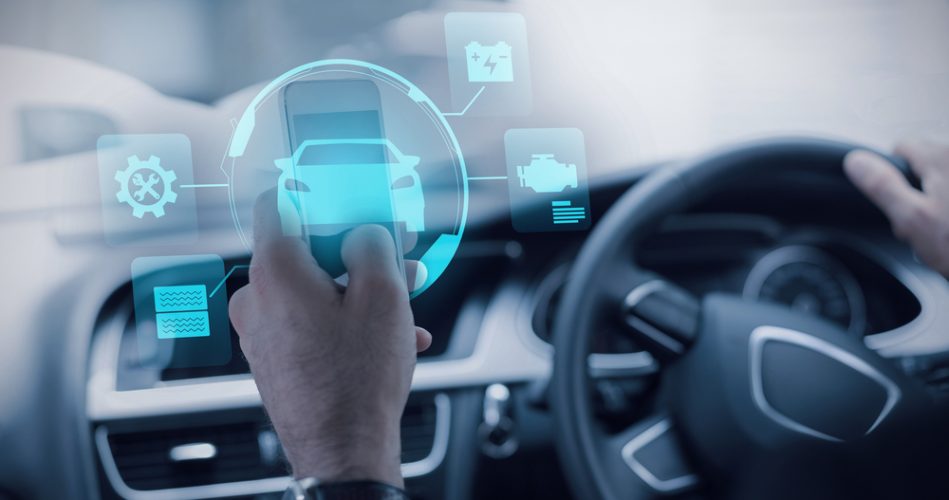 Ever since the phenomenon of the Internet of Things (IoT) commenced, the world we live in has changed by leaps and bounds. In this IoT world, any device that can be switched on and off can connect to the internet, send and receive online data, and communicate with other devices that belong to the huge network of connected things, as well as connected places and people.

The range of IoT devices is unbelievably vast. It’s not just mobile phones and computers, but almost everything from TV sets to home locks and cars as well. That’s how far the IoT works in our everyday life.

If you didn’t know any better, you might think that you’re watching a futuristic sci-fi flick. But the truth is, IoT is really where the future is headed.

What Are Connected Cars?

The technology for connected cars was first introduced in 1996 by General Motors in collaboration with Motorola Automotive. At the time, OnStar, the first connected vehicle, used a voice-call enabled system to route calls to a call center in case of a road emergency. As the years passed, connected cars kept upgrading the systems until the culmination of the 4G LTE technology in 2014.

The idea for connected cars is to allow motorists to control their car’s key functions remotely via mobile devices. With this kind of functionality, you can monitor the safety of your car even if you’re not inside the vehicle.

A typical example is when you need to check if you were able to lock the car doors before leaving it in the parking area. When you have a connected car, all you need to do is access an app on your phone to make sure your car doors are locked.

Plus, since the devices used to control connected vehicles have access to the internet via a local area network, all the other devices connected to that network can collect and exchange data with one another.

Your car’s navigation system, for example, will not only notify you about traffic jams or road accidents, but also forward that information to warn other vehicles in the network.

The Future of Connected Cars in an IoT Environment

The iteration of connected cars will keep changing as long as new car technologies emerge in the IoT space. We break down a few possibilities that we might be able to expect from connected cars in the coming years.

Use of video for entertainment and driver safety

Video offers both recreational and security value for connected cars. In the entertainment department, it’s no longer about just live streaming video into a car’s infotainment system. There are now models of connected cars that can predict a driver’s route schedule and identify at which part of the route would the car be most likely get disconnected from wireless connectivity.

To ensure that there will be no interruption in video streaming, the system would download video content before reaching any weak spots so that people inside the car could view a program continuously. Drivers and passengers might especially appreciate this feature during days when traffic is really bad.

The virtual reality (VR) technology will also be crossing over to connected vehicles anytime soon, not just to let drivers experience a virtual test drive, but also become a form of entertainment for drivers and passengers in connected cars.

If you’re watching a film using a VR headset, any turn or movement of the car will cause a similar action with the film’s characters. It’s a whole new level of entertainment that might appeal to car owners who are also technology enthusiasts.

Video will also be helpful in giving drivers a 360-degree view of the road and its surroundings, which could minimize vehicular accidents. This can be made possible by using car-mounted cameras to collect images even in the dark and weave them together in a video clip.

Another application of video technologies in connected cars is the so-called “see-through services.” The idea is to eliminate blind spots, as the car in front of you can take a video of the road ahead and transmit the video footage to the car behind it.

Connected cars are in sync with the cloud and the server of car manufacturers all the time, which could pose risks if someone gains access into those connection paths illegally. Thus, car makers and their respective suppliers have to work together to ensure that the hardware and software components have end-to-end security features in them.

This way, it will be difficult for hackers to manipulate all the critical data that goes through the car’s connection points.

An ecosystem of collaborators

A collaborative partnership between car manufacturers and telecom companies will be crucial since connected cars are dependent on network connectivity.

Telecom companies have to consistently provide fast and reliable Wi-Fi speed across connected car platforms to make it possible for car users to install software updates in a timely manner.

In return, car manufacturers have to work hard in fool-proofing the design and functionality of their products or risk exposing them to security vulnerabilities.

Soon, connected cars will be able to offer the highest level of comfort, style, and convenience that consumers are looking for in future cars. It might not take a long time before someone develops a program that would allow a connected car to open its doors on its own and receive parcels on your behalf.

Artificial intelligence (AI) technologies could also make IoT-enabled cars smarter such that they can find a parking space or book a service for you.

A few decades ago, you probably couldn’t imagine the IoT coming to life or connected cars running on expressways. Yet, all of that is happening now, and the days to come are filled with so many possibilities—ones that could have a great impact across the car industry, mobile technology businesses, and consumer communities.

What IoT and big data mean for car safety technology