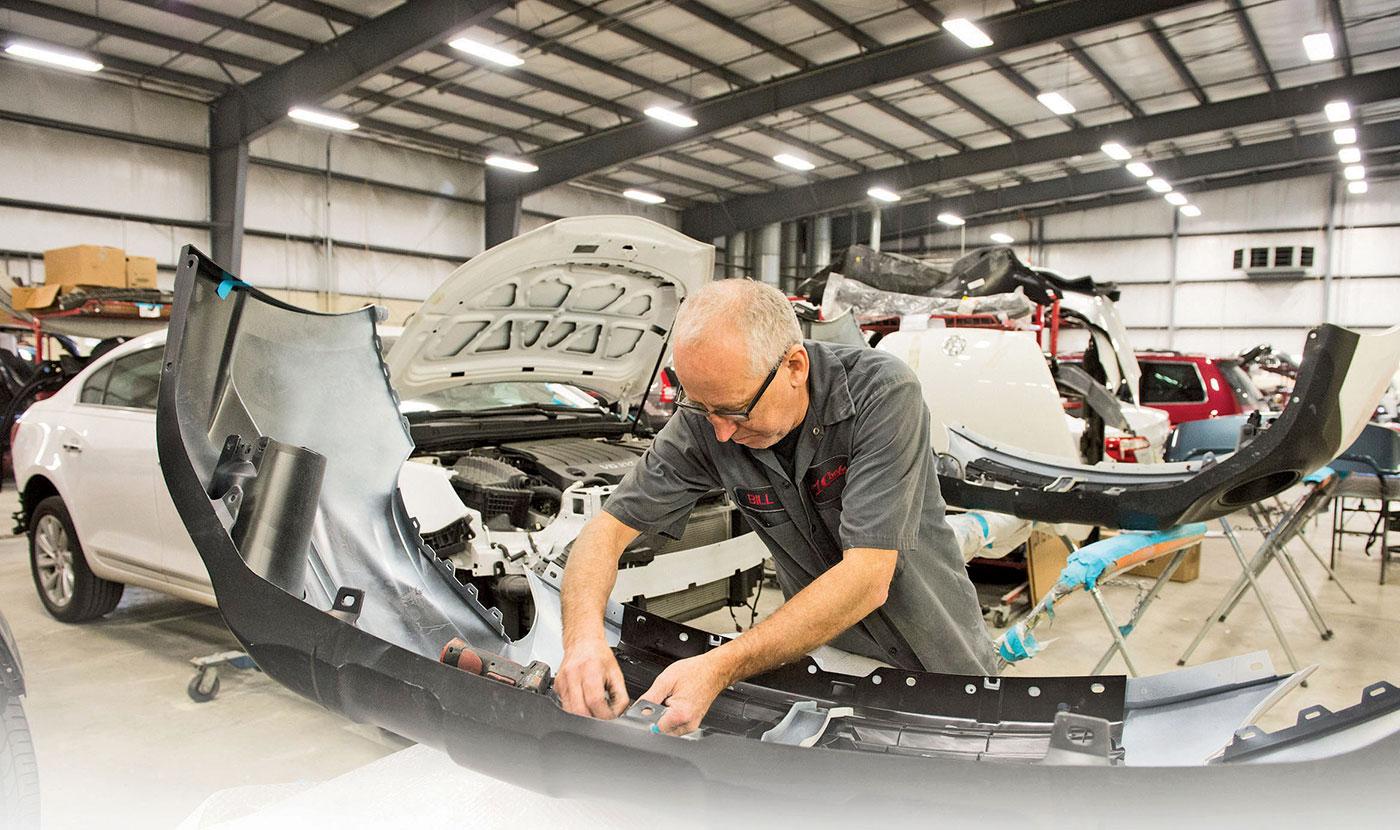 May 16, 2017, Collision Repairers
2.02kViews
Why shouldn’t franchised dealerships just give up on collision repair?

Just two of every five U.S. new-vehicle dealerships have body shops. A fine-tuned Google alert will provide a chronicle of dealers who are selling their shops to, or entering into partnerships with, independent chains and consolidators.

Such a search also will show who the big players are in collision-center operations these days. They carry names such as Gerber, ABRA, Caliber and ServiceKing. And they’re getting bigger.

These four own nearly 1,500 of the nearly 38,000 collision repair centers in the United States and Canada — almost four times the number they held five years ago. An industry analyst predicts their share of the revenue pie will rise to two-thirds by 2025.

So why not give up? For one thing, collision repair is a $35 billion-a-year business in the United States. That’s a lot of money to cede to competitors. And as anyone old enough to remember 2009 can attest, car sales blow hot and cold.

But collision repair? It’s “a stable business,” says Rob Cochran, CEO of #1 Cochran, a group of 18 dealerships based in the Pittsburgh area.

In his latest defy-the-trend moves, Coch-ran acquired his sixth collision center in March and plans to open a seventh early next year.

One trick, Cochran says, is to impose standardized repair processes at every collision center. The workloads at each body shop are balanced centrally to achieve peak efficiency.

Cochran isn’t the only contrarian. AutoNation Inc., the largest U.S. dealership group, said last month that it is unifying its 70 collision centers under its retail brand — and plans to open or acquire at least 15 more free-standing repair centers within two years.

AutoNation also is launching its own line of repair and maintenance parts and is expanding its used-vehicle dealership network, including collision repair facilities. The goal of these initiatives, says CEO Mike Jackson, is improved customer retention in the service departments of all AutoNation dealerships.

Experts have some tips for other dealers who seek a bigger piece of the action in collision repair.

For starters: Don’t run your collision center as an afterthought. Instead, fully integrate your bump shop — even if it’s off-site — with not only your service department but also your sales operations. That will enable you to take advantage of both the dealership’s and the automaker’s brand value to attract customers.

To reap these rewards, says industry consultant Vincent Romans, a dealership must operate “within a culture where the collision repair business is as important as the front end of the business for selling cars.” 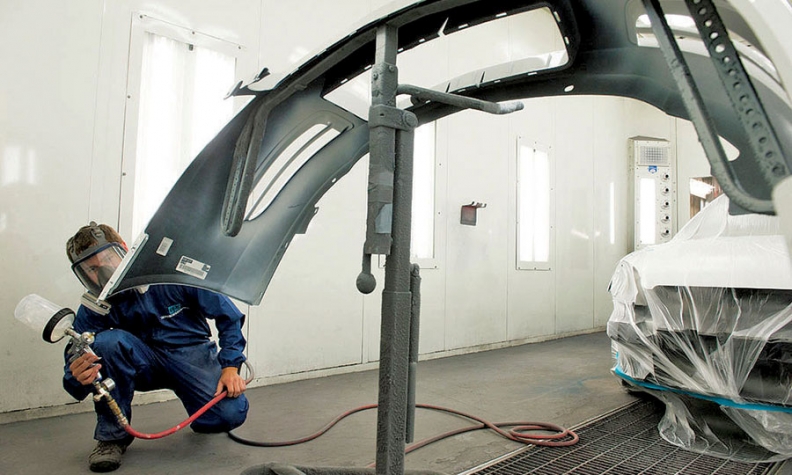 Technicians make collision repairs at a #1 Cochran body shop in suburban Pittsburgh. While many other franchised dealerships are selling their body shops to, or partnering with, big consolidators, Cochran is bucking the trend by expanding its collision business. Photo credit: JOE APPEL

“There can be much synergy between the two ends of the business, which can be leveraged to manage and sustain customer relationships,” Romans, the CEO of Romans Group in Barrington, Ill., told Fixed Ops Journal.

Some dealers say they are upgrading their collision centers as a way of preserving the independence — and profits — of these facilities. But even as dealerships improve their body shops, competition from consolidators shows no signs of abating.

Each of the four major consolidators — Caliber Collision, ServiceKing, ABRA Auto Body & Glass and Gerber Collision & Glass — expects to do more than $1 billion in business in 2016. Caliber, ABRA and ServiceKing are funded by private equity investors; Gerber is a subsidiary of Boyd Group, a publicly traded Canadian company.

Romans estimates that consolidator-owned body shops will account for nearly 15 percent of industry revenue this year and says that figure could rise to more than 20 percent by 2020. Rex Green, a Jefferies LLC investment banker, predicted last year that by 2025, “if past growth rates were to continue, two-thirds of the revenues of [the] industry will be captured by the four consolidators.” 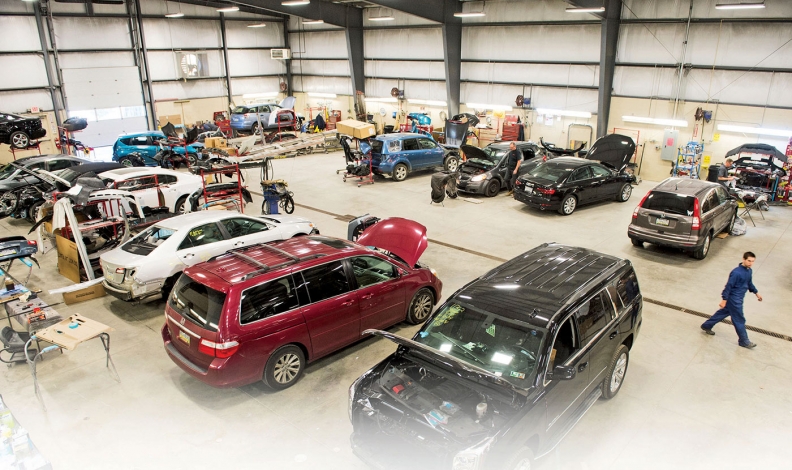 Dealership groups that operate body shops, such as this #1 Cochran collision center, face growing competition from consolidators and independent shops. Unlike Cochran, some dealers are getting out of the collision repair business. Photo credit: JOE APPEL

“Grow fast or be acquired’

In recent years, some franchised dealerships and groups — including such prominent names as Fletcher Jones Motorcars, of Newport Beach, Calif., and Pohanka Automotive Group, which operates in the Washington, D.C., area — have sold collision operations to, or otherwise affiliated with, Caliber or other consolidators. Other dealerships are partnering with collision repair chains, notably Carstar.

“It’s becoming a matter of growing fast or being acquired,” says Brad Mewes, the principal of Supplement, a consulting firm in Irvine, Calif. “The big are getting bigger through economies of scale and their core competencies.”

Yet Romans notes that body shops operated by franchised dealerships have significant advantages. They enjoy built-in customer bases. They can mine dealership sales data to market to repair customers, he adds.

Automakers routinely push lease customers to have their vehicles repaired by dealerships with manufacturer certification, to preserve residual values. Romans calculates that dealership body shops have a higher probability than independent competitors of repairing new cars during at least the first two to four years they are on the road.

AutoNation and other major dealership groups are among the largest collision-center operators by annual revenue. These groups, Romans says, “are being very aggressive” about improving the efficiency of their centers.

Sonic Automotive Inc., for example, integrates collision repair operations in its regional markets in an effort to achieve cost-efficient economies of scale. Sonic places its 18 large collision repair shops at the center of a hub-and-spoke network.

Each shop serves five to seven Sonic dealerships, says Steve McNamara, the group’s national collision director. He notes that “it’s not uncommon to have a Caliber Collision or an ABRA [body shop] within 2 or 3 miles of one of our dealer-owned stores.”

Crash test
Dealers and consultants offer these tips on successful operation of a collision repair center.

■ Integrate body shop activities with those of the service and sales departments.
■ Use the dealership’s and automaker’s brand value to promote the collision center.
■ Mine dealership sales data to identify potential repair customers.
■ Compete for repairs of leased vehicles by touting manufacturer certification.
■ Take part in direct repair programs as well as manufacturer-related repairs.

The competition between dealerships and multishop operators includes a rough division of labor. Dealerships are more likely to do manufacturer-related collision repairs, which tend to be more extensive, difficult, and costly.

As the importance of such repair programs grows, so does the competitive edge for dealership collision centers. Sonic’s repair shops either have or are completing every available automaker certification, McNamara says.

Body shops operated by consolidators and chains often have an advantage in Direct Repair Programs approved by auto insurers looking for lower-cost providers. Jim Stapleton, who directs one of the three collision centers operated by Herb Chambers Cos., which owns 35 dealerships in New England, says the major consolidators have stayed out of Massachusetts because it effectively prohibits the DRP model.

But as more states authorize such programs, they represent a growing source of potential business for dealership collision centers as well.

For smaller dealerships or those in more isolated markets, affiliation with a multishop operation or big repair chain may offer benefits.

Such an association can provide greater influence among vendors and insurers, business and marketing expertise and technology and software support in improving collision repair facilities, Romans says.

“When you’re a stand-alone operator, you’re operating in a void around your own metrics,” he says. “Having that peer group view, and a ranking that tells you where you stand relative to your peers, does sometimes lift all boats.”

The collision center at McKie Ford-Lincoln in Rapid City, S.D., has been affiliated with ABRA since 1995. Although ABRA has formed partnerships with about 40 franchised U.S. dealerships, the company has paused its pace of partnership with dealerships this year, at least temporarily.

“You’ve got to pay franchise fees” to ABRA in the form of a percentage of sales, he acknowledged. “But if it takes you to the next level, isn’t it worth it?”

Eric Schmit, the body shop director at Friendly Ford in Roselle, Ill., says his dealership’s affiliation with the Carstar repair network has conferred similar advantages. “Once we had Carstar’s name behind us, [insurers] saw us as a true competitor,” he says.

Whether the consolidation of the collision repair industry is a threat to or opportunity for franchised dealerships — or both — dealers’ best response may be to concentrate on improving their own practices.

“I’m not sure what the consolidators’ plans are,” dealer Cochran says. “We’re really just focused on ourselves and how we can get better.”

Courtesy of  Automotive News
Disclaimer:  AutoFacets doesn't claim or takes credit for images/content/videos/whitepapers/etc. featured on its website. All images/content/videos/whitepapers/etc. are copyrighted to its respectful owners and are shared for informational purposes. This sharing is not intended to infringe the copyrights of respective authors.