In the Auto Industry, the Future Is Software — Not Machinery 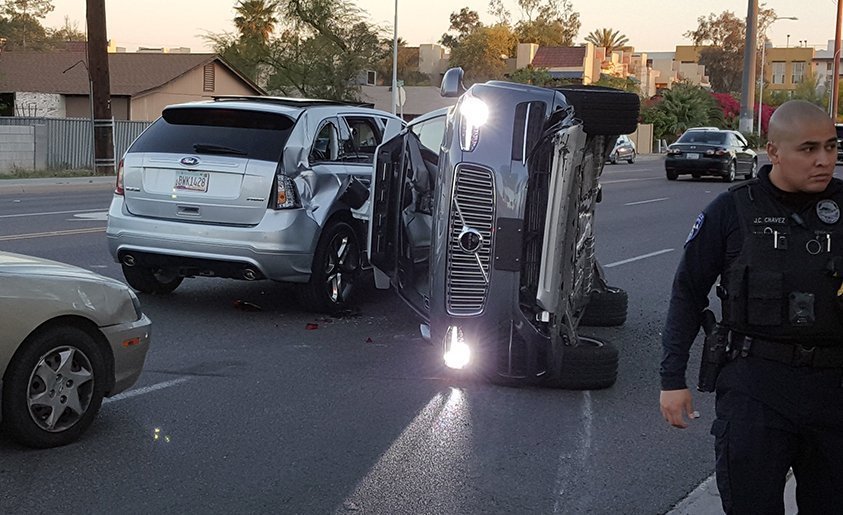 In the age of electric vehicles, the powertrain will become just another purchased component. It’s the software that the company must own to call itself an automaker.

A Volvo lying on its side in Tempe, Arizona, wouldn’t normally rate a national headline. After all, Volvo has long asserted that the best attributes of its cars reveal themselves only in a crash. But this was an autonomous Volvo, part of a small test fleet Uber operated in Pittsburgh, San Francisco, and Arizona. The latter had welcomed Uber with open pro-business arms after the company and the California DMV got into a semantics spat, since resolved, over a $150 permit. The Cal DMV had revoked the registrations for Uber’s 16 test vehicles, and if the bureaucrats were motivated by the fear of a couple tons of undercooked technology circulating among the driving public, those fears seem to have been vindicated by the photos of the capsized Volvo.

It doesn’t matter that, by all accounts, it wasn’t the fault of the Volvo’s computer that a driver turned suddenly in front of the oncoming robo-car, giving neither it nor the human minder aboard time to avoid the impact. Autonomous cars will live in a world of random surprises. Note that around 17.5 million light-duty vehicles were sold last year, swelling the national fleet to more than 240 million vehicles, and only the most infinitesimal percentage of them has any autono­mous ability what­soever. That will be true for this year as well. And 2018, ’19, and ’20. At least for the next decade or three, autono­mous cars will have to contend with the many heteronomous cars already on Ameri­can roads, including those driven by a very common form of idiot who hooks a left in front of oncoming traffic.

Which is why autonomous-car development has moved on from the impossible task of thinking up and programming a computer to respond to every conceivable driving scenario to getting cars wired up with sensors and on the road to see what it’s really like out there. As you read this, these cars are sponging up so much data through their unblinking eyes that it would exhaust the memory of the MacBook Pro that I’m writing this on in under a minute. Road signs and signal timing and lane striping; merges and T-junctions and four-ways; the effects of wind and rain and glare and shadow; the driving style of tailgaters and dawdlers and the distracted and the disoriented; it all goes onto the hard drive.

A friend who works in so-called big data told me recently that the digital information generated by these test cars meas­ures out in petabytes per day, a petabyte being 1 million gigabytes. All that data must be filtered and analyzed for the patterns that we human drivers know from experience. That’s a job for open-source programs such as Hadoop, a platform named after a child’s stuffed elephant, that make it easy to spread really big processing jobs over many computers. The people in the machine-learning trade figure this is the best way to teach a computer to drive; just get it out on the road, the same as your teenager.

Our world is changing; machinery matters less than software. Mazda R&D chief Kiyoshi Fujiwara told me at the Detroit auto show this year that in the age of electric vehicles, the powertrain, that core technology that is so important to the identity of a car brand, will become just another purchased component. It is the software, the brains, that the company must own to call itself an automaker. Along those lines, Honda recently opened its R&D Center X to focus on robotics, machine learning, and artificial intelligence. It also launched a software lab on the 27th floor of a Tokyo skyscraper that has all the beanbag accoutrements of a Silicon Valley computing mosh pit, the better to attract the keen young programming minds that are now in such high demand in virtually every other industry. Stanford University artificial-­intelligence expert and Honda consultant Edward Feigenbaum explained to Automotive News that Honda’s “current R&D leadership saw the need to move beyond the mechanical engineering of the past toward a digital future dominated by software, not mechanism.” Imagine Honda’s museum of the future, where little black boxes with blinking lights are displayed proudly next to examples of VTEC and CVCC.

The kids in my high-school lunchroom talked about the cars they craved, while the few computer geeks huddled in a corner speaking in BASIC and other foreign languages. I haven’t been in a school lunchroom in a while, but by all reports, the ratio has pretty well reversed. The geeks won, judging from all the electronic devices about and the kids who say they want to go into computers. We who delight in the finely orchestrated motion of cams pressing on valves and forests of connecting rods cavorting in a perfect balance of lubricated harmony increasingly look like rust-age dinosaurs. Eventually they’ll put us in museums, too.

Courtesy of Car and Driver