Changing image of junkyards: Auto recyclers embracing technology and expanding base to women and millennials 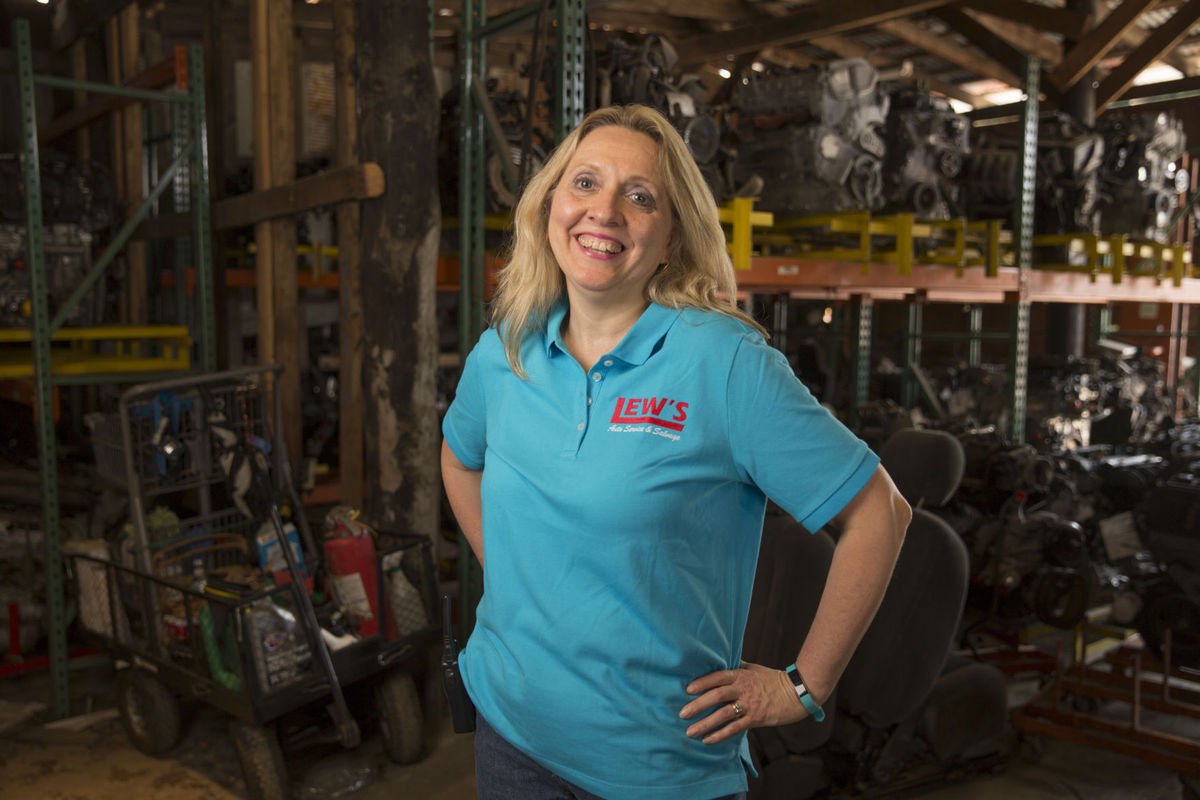 The auto recycling business has embraced technology, and it could save you some dough if you are a bargain hunter or the do-it-yourself type.

That’s the message automobile recyclers are promoting as they cope with a changing industry.

For instance, no longer is junkyard the preferred term for lots where auto recyclers store their acres of busted-up cars. They are called simply “yards.”

And shade tree or bootleg mechanics who work on cars in the backyard in their spare time are just a fraction of the customer base for many yards, which sell primarily to other businesses and insurers.

Auto parts recycling is a $32 billion-a-year industry based on sales, according to Manassas-based Automotive Recyclers Association, a national association representing auto recyclers.

An estimated 11.5 million to 14 million vehicles are recycled every year in the U.S., the Automotive Recyclers Association notes. In Virginia, there are 492 active salvage dealer licenses, according to the Department of Motor Vehicles.

“Everybody can’t afford a new car. That is where we come in,” said Lisa Street, president of the Virginia Automotive Recyclers Association and office manager at her family’s Lew’s Auto Service and Salvage in Spotsylvania.

A reusable part salvaged from a wrecked vehicle can cost a fraction of the cost of a new, aftermarket part. Salvaged parts can be small items such as side view mirrors and taillights or bigger ticket items such alternators, engines and transmissions.

“This is not junk,” said Michael E. Wilson, CEO of the Automotive Recyclers Association.

“This is high-priced stuff and something that has become very sophisticated over the years with computerized systems. … Our parts are (original equipment manufacturer) parts. The price can be a 30 percent to 80 percent discount depending on what the part is.”

But like much of retail, the used auto parts business is having to find new ways to reach customers — both old and new.

“Our motto for this year was change … to change what people’s perception of what a junkyard was,” said Troy Webber, the third generation of his family to operate Chesterfield Auto Parts, which has three locations in the Richmond area.

Webber is not so opposed to using the “j” word because that’s how their customers know them, but he is trying to redefine it.

“For a long time, we had been trying to convince people that we weren’t a junkyard. But what we found is that more people are familiar, really, with us being a junkyard. So what we wanted to do was change people’s perception of what a junkyard was. This is not some dirty, junky scrap heap where you have to get greasy and muddy. We put a lot of effort into making this (yard) user-friendly,” Webber said.

One means of getting their message out is through the use of technology — social media and online search portals that let customers look for parts by points and clicks or taps and swipes.

“The progressive yards are embracing that technology in order to get their parts out to the consumer who is buying nowadays,” Street said.

Street was in her teens when she started working at Lew’s Auto Service and Salvage in Spotsylvania, which her parents started operating in the early 1980s. With her three sons working there now, there are three generations of her family in the business.

“Old-time yards … where people walk in and ask for the parts, they are not doing as well as the progressive type yards,” Street said.

Before, she said, customers would call asking if a yard had a part. Or the customer would walk in and yard staff would go through books called Hollander manuals, which detail parts that are interchangeable among different vehicles.

“Now when they call you, they know you’ve got it because you’ve got a Facebook page, you’ve got some type of software that puts your parts out there for people to see. People are doing Craigslist, doing eBay,” Street said.

“A lot of the yards are doing as much as they can to try to hit as many people as they can,” Street said.

“Data is king for all industries. That is very much the truth in this industry as well,” Lacy said.

“When we purchase a vehicle to dismantle for parts, we understand what our customers are wanting. When I go to purchase a vehicle, I know that I have had a certain number of people request a type of vehicle,” he said. That information is gathered when a person calls or searches the company’s website online.

The approximately 1,600 salvage vehicles his business acquires annually are purchased at auto auctions and from insurance companies that have declared them a total loss, Lacy said. Most are later-model cars, averaging around the 2009 model year, he said.

A car hit in the back will have a lot of salvage parts in the front, and vice versa, Wilson said.

Lacy said very little of his sales these days are to people who walk in the door.

“It used to be a big chunk of it,” he said. Now, about 80 percent of what Lacy Auto Parts sells is wholesale to repair facilities, while the other 20 percent is retail direct to consumers. Cars have more computer gadgetry these days, making them harder to work on.

“It is so much more difficult now for the shade tree mechanic to repair a vehicle just because of the technology required on his or her part to do that repair,” Lacy said.

“What we call the electronic componentry of a vehicle — it used to not be anything. Even 10 years ago, there wasn’t nearly what there is today. With some of the later-model Mercedes and BMWs, there are over 200 computers in the vehicle,” Lacy said.

At Webber’s Chesterfield Auto Parts location at 5111 Old Midlothian Turnpike, the business model is 100 percent retail. Customers — often amateur or professional mechanics — can come in and pull parts themselves or pay to have it done. Their stock is primarily vehicles 10 years old or older.

To try to expand their customer base, Webber enlisted the help of local advertising firm Barber Martin Agency to help the 77-year-old business update its marketing strategy. The ad agency developed new advertisements that try to grab the attention of women and millennials — groups not necessarily familiar with automobile recycling yards and probably nervous or scared of tackling a repair.

One ad shows a young man playing video games with a friend; the other shows a woman power walking with a friend down what looks like a suburban street. Neither chief character looks like the typical backyard mechanic, but one plans to replace a radiator and the other’s weekend plans include replacing a taillight.

“It was about empowering this newer customer to feel they can do it themselves, which is how we ended up with ‘find your inner mechanic,’” said Deb Hagan, Barber Martin’s chief creative officer, quoting the ad’s tag line.

About a third of Chesterfield Auto Parts’ customers are women, Webber said.

“What we are really trying to do with our advertising is show that this is really not that complicated,” he said.

“We’re here to help you understand, and we’re here to help you through the process. Also in the past couple of years, we’ve added things like a parts-pulling service. So that if you don’t have the tools or know-how to pull the part off, we go in and do that for you, trying to reach out to a broader spectrum of customers.”

The auto recycling industry faces some of the same issues problematic throughout the entire auto industry — how to deal with recalled parts, for instance, Takata airbags.

Also affecting auto recyclers is resistance from the big auto manufacturers to release information on interchangeable parts among different vehicles and model years.

“That makes it hard for us to sell our parts,” Street said.

The Automotive Recyclers Association is working on national legislation that would address those issues, Wilson said.

Legislation passed in December 2015 requires auto manufacturers to provide part name, number and description for recalled parts. That measure is in the rulemaking process, Wilson said.

A different bill that has been introduced but not passed would require auto manufacturers to provide all parts numbers for all vehicles.

“There are 260 million vehicles on U.S. roads today,” Wilson said.

“Every one of them has 100 percent used parts on that vehicle. Our challenge is to get people to know we exist, that we do quality control on the parts we harvest from vehicles. We do not harvest parts that are not functional or serviceable. We provide warranties.”