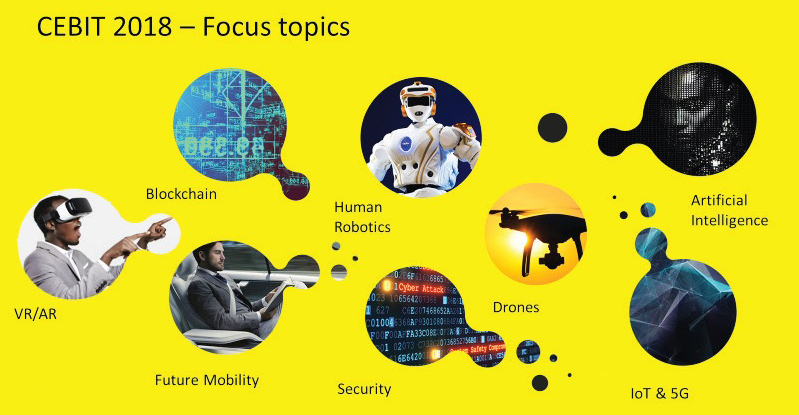 Hannover. CEBIT is gearing up for the 2018 season with a new theme mix, new event formats and a totally new look & feel. “CEBIT 2018 will be a business festival for innovation and digitization,” Deutsche Messe Managing Board member Oliver Frese commented on Wednesday in Hannover. “The new CEBIT will feature tried-and-tested tradeshow elements, inspiring conference events and special networking platforms, all embedded in an energizing and captivating festival of bright ideas for the digital future.”

Next year, the CEBIT show’s first-ever summer showcase opens on 11 June with a completely new venue layout. “The innovative power of digitization is transforming companies and the way we engage with technology at work and at home. It is bringing fundamental change to the entire economy and the very fabric of society. From these various aspects and facets of digitization we have distilled our mission for the new CEBIT,” said Frese. “Only CEBIT, with its long history and deep roots in the digital economy, has the credentials and capability needed to draw these various strands together into a cohesive, high-impact package.”

The new CEBIT comprises four main elements. First, there’s the d!conomy element, the platform for showcases dedicated to the digitization of business and government. This is whereinternational companies from the digital economy can present the real-worldsolutions and technologies that industrial users need in order to successfully digitize their operations. The d!conomy element is all about new business development. In terms of content, it has a strong lineup of themes including digital office, process and data management, security, communication, devices and infrastructure.

The second element is d!tec, which is focused on our digital future. By exploring emerging technologies poised for market launch, disruptive business models and new value-creation networks, it provides a valuable glimpse of what the future may hold. d!tec presents the latest research and profiles startups with the courage and creativity to challenge yesteryear’s givens and create new business models using inspired technology.

The third element of the new CEBIT is d!talk – a conference format alive with discourse on the myriad economic, political and social issues arising from and revolving around the digitization trend. With a central stage for keynotes and more than 10 smaller stages embedded in the d!conomy and d!tec parts of the show, d!talk is CEBIT’s hub for digitization dialogue, and as such a prime source of know-how and inspirational visions for the future as presented by a top-notch lineup of lateral thinkers, visionaries, experts and strategists from around the world.

The fourth element of the new CEBIT is the d!campus. Located beneath the iconic EXPO canopy on the open-air site, the d!campus is the beating heart of the show – a place where digital technology comes alive as an immersive and emotionally appealing experience. With a captivating array of performances and happenings, the d!campuswill put a special spin on the fruits of digitization while at the same time offering rich opportunities for casual, one-on-one interaction– not only throughout the day, but also right on into the evening hours. d!campus is designed to treat the crowds to immersive experience illuminating digitization from every angle, and as such it’s a great place for win-winconversation and networking.

“The new CEBIT will pick up on all the big digitization topics and present them in all their many facets,” Frese said. The show will take place against the backdrop of an exciting matrix of digital themes, including artificial intelligence, the Internet of Things (IoT), human robotics, service robotics, autonomous systems, big data analytics, cloud computing, security and virtual reality.

“To give a few examples, at the d!conomy showcase, various companies will present real-life application scenarios for artificial intelligence in the form of chatbots and data analysis. Likewise, at d!tec, visitors will encounter the latest research findings and meet with startups who are leveraging AI to hit the market with new business models in a whole range of areas, from autonomous driving to healthcare service robots. At d!talk, experts will be discussing the latest security challenges of AI. And on the d!campus, visitors will be able to immerse themselves in an array of application scenarios,” Frese added.

“We will work closely with partners, both old and new, to further illuminate and bring to life all the key trends of digitization in accordance with the new CEBIT’s four-element structure. The focus of discussion will be on both the business potential and socio-economic implications of these trends,” he said, indicating that topics like future mobility, data-driven business models in the automotive industry and driverless vehicles would play a greater role at the upcoming CEBIT. Frese noted that blockchain technology was set to revolutionize several key areas of the economy and would thus also feature more prominently at CEBIT.

The revamped CEBIT format has been well received by the digital economy. Frese: “The new CEBIT concept, with its combined focus on technology, business development and emotional appeal, is unleashing new creativity. We are now talking with new partners who have never even considered participating at CEBIT before. The show’s new formats are also generating interest among new visitor groups. As well as attracting IT experts, industry professionals and top-level decision-makers from the digital and IT user industries, our aim with the new CEBIT is increasingly to reach the next generation of business decision-makers – people who are already responsible for shepherding in the digital transformation at a more operational level in their organizations.”

CEBIT has new, differently structured opening hours that will help it to reach these target audiences. Day one, Monday 11 June, is dedicated to political leaders, VIPS and the media. “The challenges facing our political leaders in Germany and Europe will feature prominently at several events on CEBIT Monday,” Frese explained. In particular, the Welcome Night, with its high-ranking government guests from Germany and abroad, will set the tone for the three business-centric show days that follow. On those days, the exhibition stands in the halls will be open from 10 a.m. to 7 p.m. and the d!campus will be open to 11 p.m. with an action-packed program that will include live music and performances.

On the Friday, CEBIT will feature additional events and reduced admission prices – all aimed at opening the show up to a wider, digitally minded public and special communities and groups who have a key role to play in shaping the digital future. On “Digital Friday”, the CEBIT program will revolve mainly around the offerings on the d!campus and at d!tec. The d!talk program will also continue into the Friday with an exciting lineup that includes Rock the Blog, the platform for the international blogger scene. The plans for Digital Friday also encompass offerings for coders and developers, including special events such as hackathons, not to mention drone racing and recruitment events for students and young professionals.

CEBIT now also sports radically redesigned branding to underscore its realigned focus. “Only the name ‘CEBIT’ remains,” commented Frese. “New logo, new font, new colors, new webpage – so far, it has all been very well received by our target industries, and we are looking forward to working with our exhibitors and partners to finalize

the shape of the new CEBIT between now and opening day in 12 months’ time,” he added.

CEBIT also has a new ticket set-up. Discover Tickets at the heavily reduced price of 25 euros are available up until 15 August 2017. They are valid for admission to all parts of CeBIT: d!conomy, d!talk, d!tec and d!campus. After 15 August ticket prices will increase according to a time-graduated scale. Tickets to CEBIT 2018 are available online at www.cebit.de

2017 marks the 70th anniversary of Deutsche Messe AG, which was founded in 1947 with the staging of Germany’s first-ever Export Fair. Seven decades later, Deutsche Messe has taken its place among the world’s top organizers of investment goods trade fairs, sporting a rich portfolio of events held in Germany and around the globe. With projected 2016 revenue of 302 million euros, the company ranks among the five biggest trade show companies in Germany. Its portfolio includes such world-class events as (in alphabetical order) CEBIT (business festival for innovation and digitization), CeMAT (intralogistics and supply chain management), didacta (education), DOMOTEX (carpets and other floor coverings), HANNOVER MESSE (industrial technology), INTERSCHUTZ (fire prevention, disaster relief, rescue, safety and security), LABVOLUTION (lab technology and biotechnology) and LIGNA (woodworking, wood processing, forestry). The company also regularly hosts a number of internationally renowned events by third parties, among which are AGRITECHNICA (agricultural machinery) and EuroTier (animal production) (both of which are staged by the German Agricultural Society, DLG), EMO Hannover (machine tools; staged by the German Machine Tool Builders’ Association, VDW), EuroBLECH (sheet metal working; staged by MackBrooks) and IAA Commercial Vehicles (transport, logistics and mobility; staged by the German Association of the Automotive Industry, VDA). With more than 1,200 employees and a network of 58 sales partners, Deutsche Messe is present in about 100 countries.