Gary Brooks scheduled a service appointment last year for a tire recall on his car. After he waited at the dealership for 45 minutes, a service adviser told him the parts department didn’t have the needed tires in stock.

Brooks is doing more than complaining about parts shortages at dealerships. He works for Syncron, a software developer that uses artificial intelligence to create products designed to help automakers and dealers improve supply processes for replacement parts. Brooks is the company’s chief marketing officer.

Among the areas to which AI is being applied: parts supply chains, collision assessments and repair processes.

In their work with automakers, Syncron and its competitors use AI to predict the parts that dealership service departments are most likely to need, and to provide them promptly.

AI enables dealerships to save money by maintaining leaner parts inventories and ordering fewer parts that are likely to be returned to the automaker or become obsolete, Brooks says.

Brooks says Syncron’s software has helped some automakers increase their fill rate — the share of customer parts demand that is met through immediate dealership stock availability — from 60 to 90 percent.

So-called smart parts can send data about use and wear directly to the software, Brooks says. The AI systems not only predict parts failures, he says, but help automakers price replacement parts more accurately by analyzing sales trends. 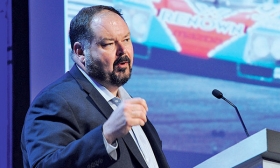 “Our wish list is to have the technology to be able to predict a parts failure on a car, communicate it to the dealer, to the parts distribution center, all the way back to the core supplier,” Davis told Fixed Ops Journal.

Such an AI-based system, Davis says, also will notify the vehicle owner: “It looks like a part will be failing on your car within the next 3,000 miles, so why not bring it in so we can fix it? The part will be here.”

Repair order fill rate is a better measure than overall fill rate, Davis says. “If your car needs three parts, and I only have two in stock, those two parts become completely irrelevant,” he says.

AI also is disrupting the way insurers examine cars and trucks damaged in crashes, estimate parts and labor costs for repairs and send the vehicles to body shops, including those operated by dealerships.

Tractable, a British AI firm, is working with Mitchell International, a developer of automotive software in San Diego, to speed accident repairs.

Tractable uses a database of 300 million images of damaged vehicles to help appraise photos of crashed cars and determine needed repairs. The company says that computers using the algorithms in its AI Review software assess damages better than human estimators.

AI-based programs improve the prospects of “a proper and safe repair,” says Olivier Baudoux, Mitchell’s vice president for global product strategy. “We strive for a repair performed according to OEM standards.”

The automaker reviews data to let customers know when their vehicles are due for service, whether routine maintenance or a recall, Proffitt says.

At the same time, the system notifies a customer’s dealership to ensure it has the parts in stock to complete the repair.

General Motors’ OnStar system uses AI to notify customers when a starter, fuel pump or other component may be going bad. It analyzes and monitors billions of pieces of data, to determine whether a part is not performing as expected, and automatically notifies customers if they need service, says GM spokesman Vijay Iyer.

Author – Mark Elias
Courtesy of Auto News
Disclaimer:  AutoFacets doesn't claim or takes credit for images/content/videos/whitepapers/etc. featured on its website. All images/content/videos/whitepapers/etc. are copyrighted to its respectful owners and are shared for informational purposes. This sharing is not intended to infringe the copyrights of respective authors.